An analysis of Bord Bia certified dairy farms has revealed a cohort who have consistently reduced their carbon footprint over three consecutive audits from 2014-2020. These herds, identified as Carbon Footprint Champions (CFC), comprise a range of herd sizes and are found in 24 out of the 26 counties. Collectively, CFC herds have reduced their carbon footprint by 18% from 1.22kg to 1.00kg CO2-equivalent per kilo of FPCM (fat and protein corrected milk) since 2014.

For comparison, all herds in the Sustainable Dairy Assurance Scheme (SDAS) have collectively reduced their carbon footprint by 4% in the same period (from 1.15kg to 1.11kg CO2-eq/kg of FPCM).

Bord Bia engaged Professor Thia Hennessy of UCC, to compare the financial performance of the CFC farms to the SDAS farms to determine if it’s possible for farmers to reduce their carbon footprint while also increasing profit, the so-called win-win scenario. Data for the period 2014 to 2020 is used to estimate the economic performance of both SDAS and CFC farms.

CFC farms began the period with slightly higher production volumes relative to SDAS farms, 423,000 litres versus 389,000 litres. The volume of milk production increased on both farm groups in the 2014 to 2020 period. Milk production increased by 31% from 2014 to 2020 for SDAS farms and by 51% for CFC farms over the same period (Figure 2). While both farms will have experienced the same milk price trends over the period, CFC farms will have increased their price per litre slightly more than SDAS farms due to improvements in milk composition. Milk solids per cow increased by 16% on SDAS farms from 2014 to 2020, which was in line with average increases achieved nationally, while solids improved by 22% on CFC farms. 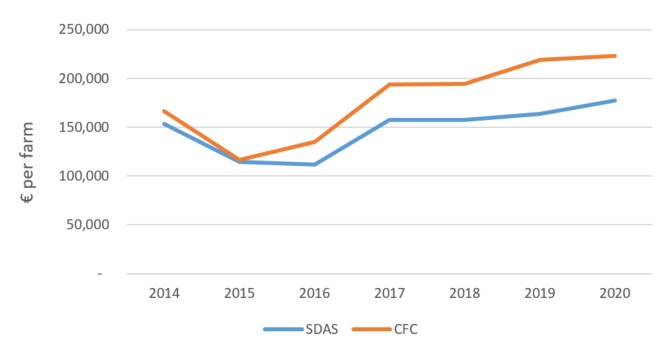 In line with increases in yield, there was an upward trend in the volume of concentrate fed per cow on both farm types over the period. Kilogrammes per cow increased from 724 to 932 on SDAS farms from 2014 to 2020, while volumes fed per cow increased by slightly less on CFC farms; from 751 kg per cow in 2014 to 908 kg per cow in 2020. The data on grass use and grazing days suggests that CFC farms have increased their use of grass. In 2014 both farm groups had a similar grazing season of 253 days. By 2020 CFC farms had extended the grazing season to 258 days while SDAS farms had reduced the number of days at grass.

Expenditure on concentrate feed increased for both farms over the period. With larger increases on CFC farms due to more accelerated growth in herd size.

Fertiliser application rates increased slightly on SDAS farms while remaining more or less static on CFC farms. Fertiliser price started the period at an elevated level and followed a downward trajectory since 2014. Overall, expenditure on fertiliser has declined on both farms, although by slightly more on CFC farms due to static application rates.

Total variable costs on dairy farms are comprised of expenditure on concentrate feed and bulky feed, pasture costs, including fertiliser, and other costs such as veterinary, medicines, energy, fuel and casual labour. Figures 4 and 5 present an estimate of total variable costs per litre and per farm for SDAS and CFC farms. This is based on the data provided on concentrate feed and fertiliser use levels, while all other variable costs are estimated using the Teagasc National Farm Survey data on typical costs per litre for the average dairy farm. 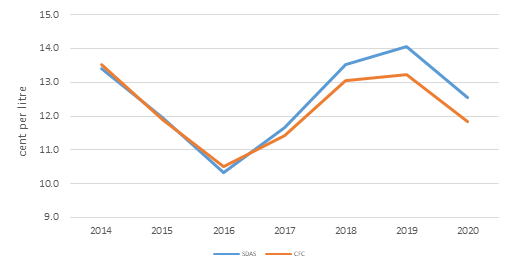 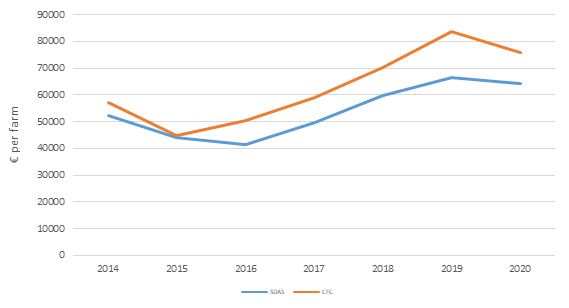 Dairy gross margin is estimated as total dairy gross output (presented in Figure 2) less total variable costs. Gross margin per litre varies between 26 and 17 cent per litre over the period, mostly due to milk price volatility. Although both farm groups are exposed to similar weather conditions and price trends, the CFC farms manage to increase the gross margin per litre by one cent over the SDAS farms. This increase arises from more efficient use of feed and fertiliser and superior milk composition.

CFC farms achieve superior economic performance by improving milk composition, improved efficiency in the use of concentrate feed and fertiliser and greater use of grass as well as an increase in the volume of milk produced.

Given that CFC farms improved their carbon performance more than SDAS farms, this analysis supports the hypothesis that win-win scenarios are possible; that is where farms improve their economic situation while also reducing their carbon footprint.