Fillet of Ham with Redcurrant Sauce and Boulangère Potatoes 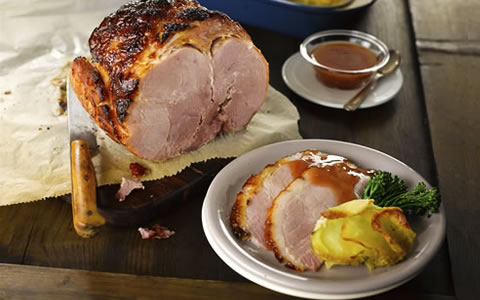 This is a special occasion or dinner party dish, but it’s easy to make in stages- the key is the glaze. What makes this dish so good is that the glaze also acts as the sauce so get this right and you are well on your way.

To cook the ham: Place the ham in a large saucepan and cover with cold water. Add a few peppercorns and a bay leaf. Cover with a lid and bring to the boil. Then reduce the heat and simmer gently for 20 minutes per half kg.

To make the Boulangère Potatoes: Melt the butter in a frying pan over a medium heat and add the onions. Cook gently until softened and lightly coloured. This will take about five minutes. Add in the thyme. Lightly butter a 1.5 litre gratin dish. Add the potatoes and onions to the dish in layers. Season as you go and finish with a layer of potatoes.

Pour the warm stock over the potatoes. Top with a lightly buttered layer of greaseproof paper. Bake for 50-60 minutes until the potatoes are cooked and the top is golden and crisp.

To make the Glaze: Using a potato peeler thinly pare the peel off the orange. Then chop the orange into chunks, cutting away any pith.

Place the orange peel, orange chunks, redcurrant jelly, mustard, shallot/onion and ginger in a food processor and blend until smooth.

To glaze the ham: When the ham is cooked take it from the saucepan and place it in a roasting tin which has been lined with greaseproof paper. Keep the cooking liquor to add to soups and sauces.

Allow the ham to cool a little then score the fat and brush about a quarter of the glaze over it. Set aside the rest of the glaze to serve as a sauce with the ham. This can be served cold.

Bake the ham in the oven for half an hour until the glaze is golden and bubbling. Remove from the oven and allow to rest for 15 minutes.

Slice the ham and serve with the Boulangère Potatoes, the remaining glaze and tender stem broccoli. 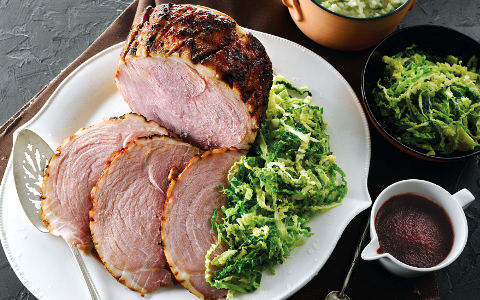 Sticky Glazed Fillet of Ham with Champ and Redcurrant Sauce 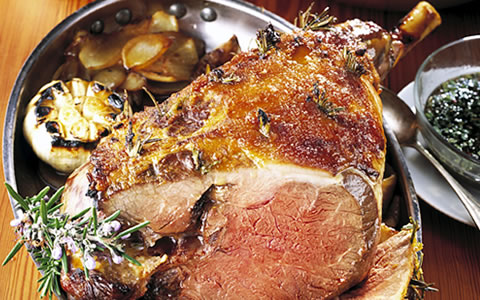 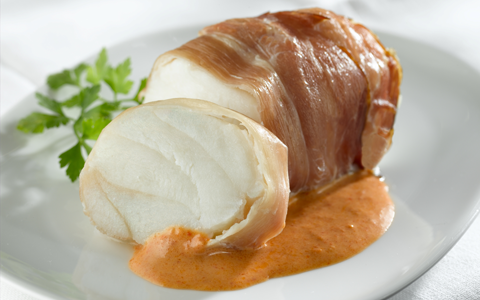