Coffee has been a growing phenomenon among Irish consumers in recent years with 75% of Irish consumers stating they drink coffee, and seven in ten drinking more than one cup a day. Sales of fresh coffee are continuing to drive growth with overall sales of instant coffee declining year on year. Coffee until recent years was considered less favourable than tea, and although tea is still the most popular hot drink in Ireland, coffee sales are growing at it’s expense. With Irish consumers becoming increasingly conscious of their health and alcohol intake, many consumers are choosing coffee shops as a place to socialise as opposed to a pub or restaurant.

While coffee increases in popularity, consumers are becoming more precise about their coffee with the coffee blend, espresso shot and even the type of milk used all significant factors in deciding what coffee to order. Mintel’s latest report found that these preferences are more common amongst 16-34 year olds with older consumers opting for the more traditional coffees like an Americano. Consumers are eager to learn about how coffee is brewed, with 3fe and other coffee companies offering brewing classes for baristas as well as coffee lovers. As consumers become more involved in brewing the perfect cup of coffee, we could see our coffee market take a transition like the current Irish craft beer market which is hugely popular in Ireland.

The future is bright for Irish coffee with off trade value sales of €176 million predicted for 2020. Last weekend Dublin hosted the World of Coffee in the RDS, an event attended by baristas and coffee enthusiasts from over 100 nations. The competition focused on promoting excellence in coffee and advancing the barista profession. 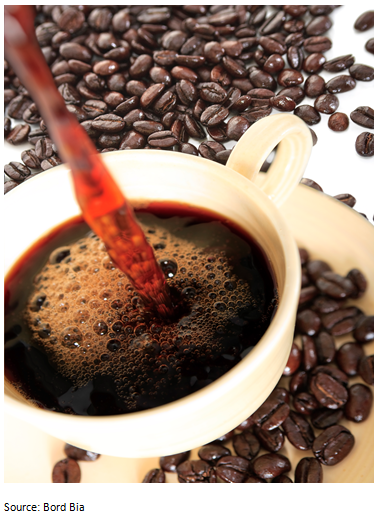