Wednesday, 26th June 2019: Three years since the UK voted to exit the European Union, Brexit preparedness is widespread amongst Ireland’s food and drinks companies at 93% (74% in 2018). However, firms are increasingly concerned by the cost implications of customs compliance and stockholding; potential weak links in logistics and many have halted investment plans due to the continued uncertainty of the evolving Brexit landscape, according to the Bord Bia Brexit Barometer 2019: Results & Actions published today. 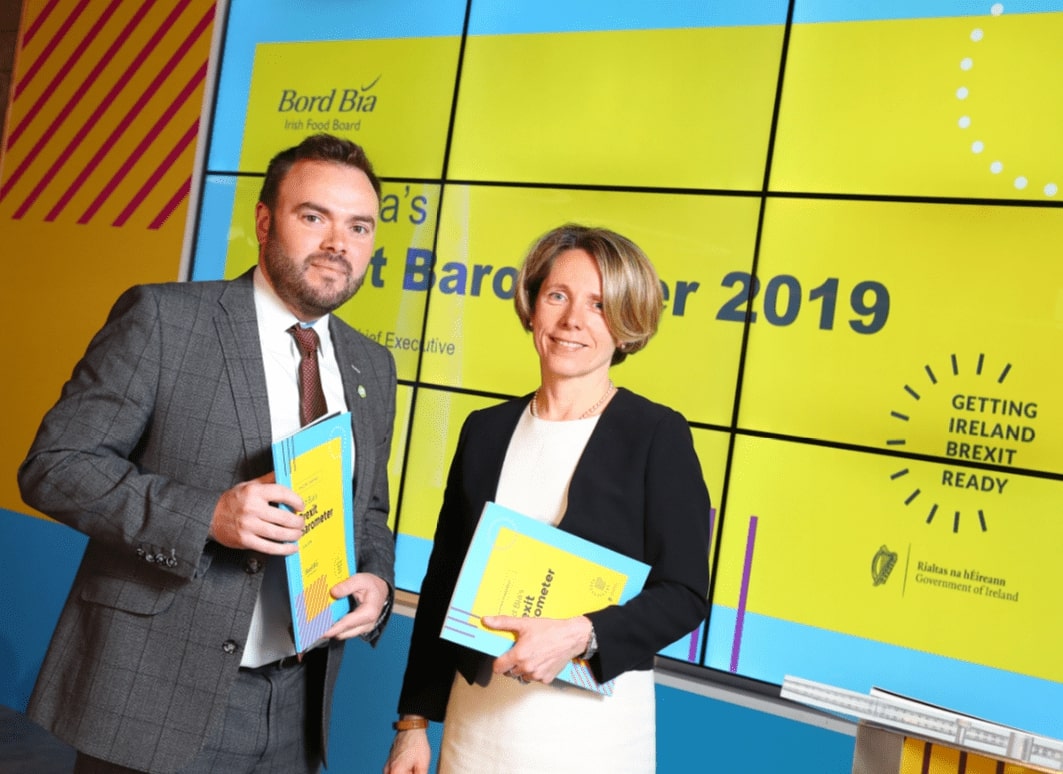 The Minister for Agriculture, Food and the Marine, Mr Michael Creed, T.D. launched the report today and addressed a gathering of 150 senior figures from Ireland’s food, drink and agri-business sectors alongside Tara McCarthy, CEO of Bord Bia, and a panel of industry experts from Ireland and the UK.

Bord Bia’s 2019 Brexit Barometer is the third in a series of annual studies that provide a comprehensive measure of Brexit readiness across Ireland’s food and drink sector with findings from 130 companies.  It is the basis and risk diagnostic tool from which Bord Bia offers a tailor made suite of supports to Ireland’s largest indigenous industry which is uniquely impacted by Brexit.  The UK accounted for 37% (+2%) of all Irish food and drink exports last year, amounting to trade worth €4.5 billion.

Informed by the findings from the 2019 Brexit Barometer, Bord Bia moves into the next phase of Brexit support for industry, focusing on specific services and actions to prepare client companies, including upskilling on Commercial Marketing Strategy development, as well as Key Customer Management. This will complementnew and existing training in critical areas such as customs compliance, logistics and supply chain and currency management.  To date, Brexit related support has been provided by Bord Bia to companies representing 72% of exports to the UK.

Launching the report, the Minister for Agriculture, Food and the Marine, Mr. Michael Creed, T.D, said:

“Amidst the continuing uncertainty around Brexit, this report highlights the true value of preparedness.  My Department, working with Bord Bia, has dedicated considerable resources to ensuring that the unique position of the Irish food and drink industry in all Brexit scenarios is firmly understood.  The coming months will bring another Brexit deadline, but it is encouraging to see that our industry is doing all it can to prioritise what it can control in facing these challenges.”

Presenting the findings of the 2019 Brexit Barometer, Ms. Tara McCarthy, CEO of Bord Bia, said that it points to a year of emphatic progress as Ireland’s largest indigenous industry prepares for one of its most significant challenges ever.

“With 93% of food and drinks companies that responded to the Barometer, representing 72% of all UK exports, makings plans and taking action, we have witnessed transformative levels of engagement due to two interlinked factors: firstly, the expectation for much of 2018 that a negotiated agreement was finally in sight and, secondly, the return to prominence of a ‘cliff edge’ no deal Brexit which remains a looming threat.  This experience left Irish exporters in no doubt that their future trading relationship with UK customers should be managed as a priority.

“Also strikingly clear from the 2019 data is the spirit of resilience and determination that is at the core of the response from the Irish food industry.  It has been said that there are no net upsides to Brexit for Ireland.  It is a challenging political and economic scenario that puts pressure on the close tie with our nearest neighbour and our largest trading partner.  What the 2019 Brexit Barometer shows is that our industry is attuned to the issues that lie ahead and both realistic and resolute in its response to them.  Eight out of ten companies plan to maintain or grow sales in the UK, whilst simultaneously, three quarters of Irish companies are actively looking beyond familiar marketplaces. This process is gaining momentum as planning around Brexit translates into concrete actions in the months ahead.”

Key findings from the full report are as follows:

Brexit readiness: 93% have made progress but 68% still uncertain about impact:

Customs and controls: A doubling in firms now counting the cost of customs

Financial resilience: half of companies expect Brexit hit of up to 10% on EBITDA

Market Diversification: 74% seeking to expand in new markets in response to Brexit