The Japan phase of the European Beef and Lamb – Ireland, Working with Nature and the European Dairy – Ireland, working with nature, campaigns will be launched at a special technical seminar in Tokyo today. Over 80 local buyers, stakeholders, and media will attend both events, where they will learn more about Ireland’s capability as a supplier of high-quality, sustainably produced beef, lamb and dairy.

Speaking of the EU campaign roll out event, Minister for Agriculture, Food and the Marine, Charlie McConalogue T.D., said he was thrilled to see Ireland at the forefront of industry campaigns aimed at building the profile of European beef, lamb and dairy in Japan, a priority market for Irish food and drink exports according to Bord Bia’s Prioritising Markets - Opportunities for Growth study.

“As part of these campaigns, almost €2 million will be invested in promotional activities in the Japanese market. This is expected to result in €11.6 million growth in Irish beef and lamb exports and €18.9 million growth in Irish dairy exports to the market - a significant feat for the Irish meat and dairy sectors”, said Minister McConalogue.

As part of the beef and lamb campaign, Bord Bia will host Irish beef and lamb exporters at an additional three trade shows, host 12 trade seminars, three Chef Masters events and welcome 27 Japanese trade and media representatives to Ireland. In addition to these physical activities, the campaign will undertake a suite of digital promotional activities, such as website and social media, advertising and recipe video development. 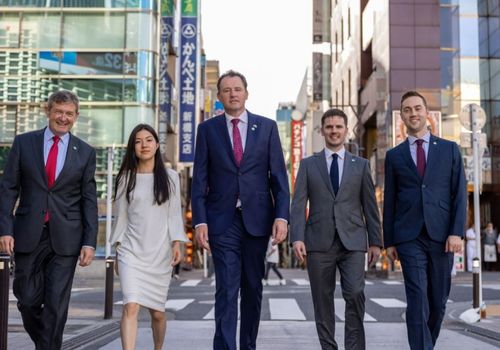 Bord Bia’s Senior EU Promotions Manager, Declan Fennell, who was also in attendance at the launch event in Tokyo today, added, “EU co-funded campaigns are a vital means of putting Ireland on the global map as a food producer. Of particular focus will be the building new relationships between Irish exporters and local importers and distributors in the relevant market. Combined, they represent the largest ever investment in third country markets for the promotion of Irish meat and dairy and will build upon the investment started back in 2017 via the €3.75 million European Beef and Lamb – Excellence in Food Safety and Quality Assurance that ran between 2017 and 2020”.

Later in the week, Bord Bia will also introduce Irish dairy to key trade buyers in Vietnam as part of the EU dairy campaign.

Minister of State for New Market Development, Martin Heydon T.D., said, “The campaign represents an invaluable opportunity for the Irish dairy sector to showcase its sustainably-produced, grass fed dairy, both on farm and in factory. The campaign closely aligns with Food Vision 2030 - Ireland’s strategy for the agri-food sector over the decade ahead, aiming for Irish food, drink and horticulture exports to reach 21 billion by 2030. In this way, the campaign will not only benefit the dairy sector, but Ireland’s entire agri-food industry”.