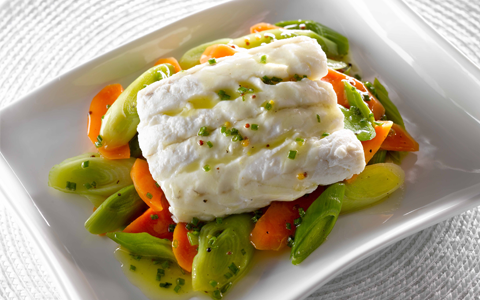 Traditionally fish has been described as “brain food” – a claim that was dismissed as an ‘old wives tale’ for many years but recent research into the links between fish and brain function suggest that this old wives’ tale may have more than a small grain of truth behind it.

We know that a large part of the brain is made up of omega-3 fats, making them vital for healthy brain function. In fact 60% of the fats in the brain are omega-3 with DHA, a type of omega-3 fat found in fish, being the main type. Omega-3 fats are essential for healthy brain development both in the womb and in early childhood. About 75% of brain cells are in place before birth and the other 25% are in place by the age of 1 year – making omega-3 fats an essential nutrient both for pregnant mothers and young children. Omega-3 fats were found to be so important for early brain development that they are now automatically added to baby milk formula and it is recommended that pregnant women eat two servings of fish every week – including at least one oil-rich fish.

Eating fish while pregnant may have benefits that go beyond early brain development. Studies have found that the children of mothers who eat fish while pregnant have better social and verbal skills at age eight compared to the children of mothers who never ate fish. Several studies have shown long-term benefits to children whose mothers ate fish while pregnant – results which back up the current recommendations for eating fish regularly. But the benefits of eating fish go beyond the early years. Researchers have found that many brain-related conditions may be prevented or even treated by good intakes of omega-3 fats, including problems like dementia, Alzheimer’s disease and depression as well as dyslexia and ADHD in children.

Dyslexia affects an estimated 4-10% of children, causing learning difficulties that can last a lifetime. There has been a great deal of research into the causes of dyslexia and other conditions affecting children such as ADHD (attention deficit hyperactivity disorder) and dyspraxia (quality of movement) and it seems that omega-3 fats such as EPA and DHA may play a role in helping to prevent or treat these conditions. Children with low levels of omega-3 fats can have a decreased ability to focus attention – which can lead to problems in skilled movements, detecting facial and emotional expressions and sequencing letters and numbers. Studies have shown that supplements omega-3 fats such as EPA, found naturally in fish, may help improve the reading skills and attention span of children suffering from dyslexia and ADHD and may also improve motor skills and general co-ordination. The benefits of omega-3 fats have been seen across many conditions affecting learning in children. This is still an area that needs more research but growing evidence suggests that children may benefit from regularly eating foods like fish, that are a rich source of omega-3 fats.

Many people expect their brain function to deteriorate as they get older – in fact we regularly joke about ‘losing our marbles’ - but recent research suggests that mental decline in old age may not be as inevitable as we think. Several studies have shown that what we eat may have as big an impact on our brains as it does on our heart or waistline. Eating plenty of fresh fruit and vegetables seems to be vital in protecting the brain into old age but just as important is regularly eating fish. In fact, much of the research into the role of fish in the brain has been carried out in people with Alzheimer’s disease and dementia. Alzheimer’s disease affects an estimated 20-40% of people aged over 85, as well as many people at much younger ages and causes considerable distress both for the people affected and for their families. Although Alzheimer’s disease may have many causes, research suggests that diet in general, and fish in particular, may play an important role.

As mentioned above, DHA makes up a large proportion of the omega-3 fats in the brain, making DHA essential for healthy brain function. Researchers looking at patients with Alzheimer’s disease have found that the brains of patients with Alzheimer’s disease have lower levels of DHA than people without Alzheimer’s. Studies looking at the treatment of Alzheimer’s have found that supplements of DHA slowed down mental decline in patients with mild Alzheimer’s, although the effect was not as strong in those with advanced disease. Studies have also found benefits for EPA, the other type of omega-3 fat found in fish, and dementia and Alzheimer’s. According to a study carried out in France, people with high levels of EPA have been shown to have a 31% lower risk of developing dementia compared to people with low levels of EPA.

Research looking specifically at the benefits of eating fish, rather than just omega-3 fats, found that those who ate fish regularly – at least once a week – showed a slower decline in mental function as they got older, compared to people who rarely or never ate fish. The benefit was a difference of at least 10% less per year. They found that those who regularly ate fish had memory and brain function that was at least 4 years younger than their counterparts who never ate fish. A Scottish study looking at fish and brain function also found that people who ate oil-rich fish like salmon, trout, mackerel or herring had an IQ level that was 13% higher than people who never ate fish. The study also found that people who ate fish were less likely to show early signs of Alzheimer’s. What is interesting about these studies, and others looking at fish and the brain, is that the benefits didn’t just come from the omega-3 fats but from the entire package of nutrients found in fish, suggesting that simply taking omega-3 supplements wouldn’t be enough to get the full benefit.

Omega-3 – Not all fats are equal

Did you know there are three different types of omega-3 fat?

EPA and DHA are the two main types found in oil rich fish.

ALA is the type that is found implants like linseed or flaxseed.

Research shows that both EPA and DHA are needed to help keep the brain healthy. In theory your body should be able to convert ALA into EPA and DHA but in real life, this only happens in very small amounts or not at all. For this reason it is useful to make sure you get some DHA and EPA regularly and eating oil-rich fish is one of the best ways to do this.

Depression is among the leading causes of disability worldwide, affecting an estimated 121 million people. There has been a great deal of research into potential nutritional causes and treatments for depression but the most promising results come from studies into fish and omega-3 fats. There is now increasing evidence that omega-3 fatty acids, found in oil-rich fish, may be helpful in the treatment of depression. Although more research is needed before definite recommendations can be made, several studies have shown benefits in patients suffering from depression who took omega-3 supplements. One study found that patients taking EPA, the type of omega-3 found in fish, reduced their ratings of depression by 50%, an effect that was similar to patients taking an anti-depressant drug. Another study found that people with the highest levels of EPA in their blood reported the lowest levels of depression. Fish is a major source of EPA and eating fish may be linked with reducing levels of depression. Depression is less common among people who regularly eat fish such as the Inuit population in Greenland. Although most of research into the benefits of fish in depression focus on omega-3 fats, researchers believe that other nutrients in fish such as vitamins B6 and folate as well as the amino acid tryptophan may be important.

While more research is needed into the role of fish and omega-3 fats in brain disorders, it is clear that there are many benefits to eating this ‘brain food’ from early brain development in the womb to keeping it up and running into old age. Benefits are seen from eating fish as little as once a week and highlight the importance of following advice to eat fish at least twice a week and to include at least one oil-rich fish. 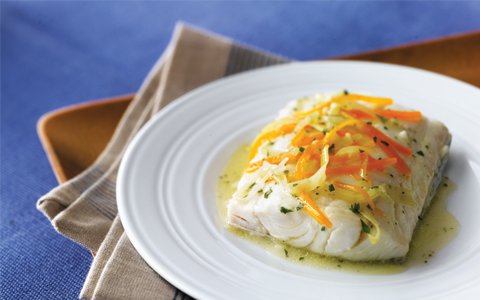 Steamed Haddock with Carrots and Leeks 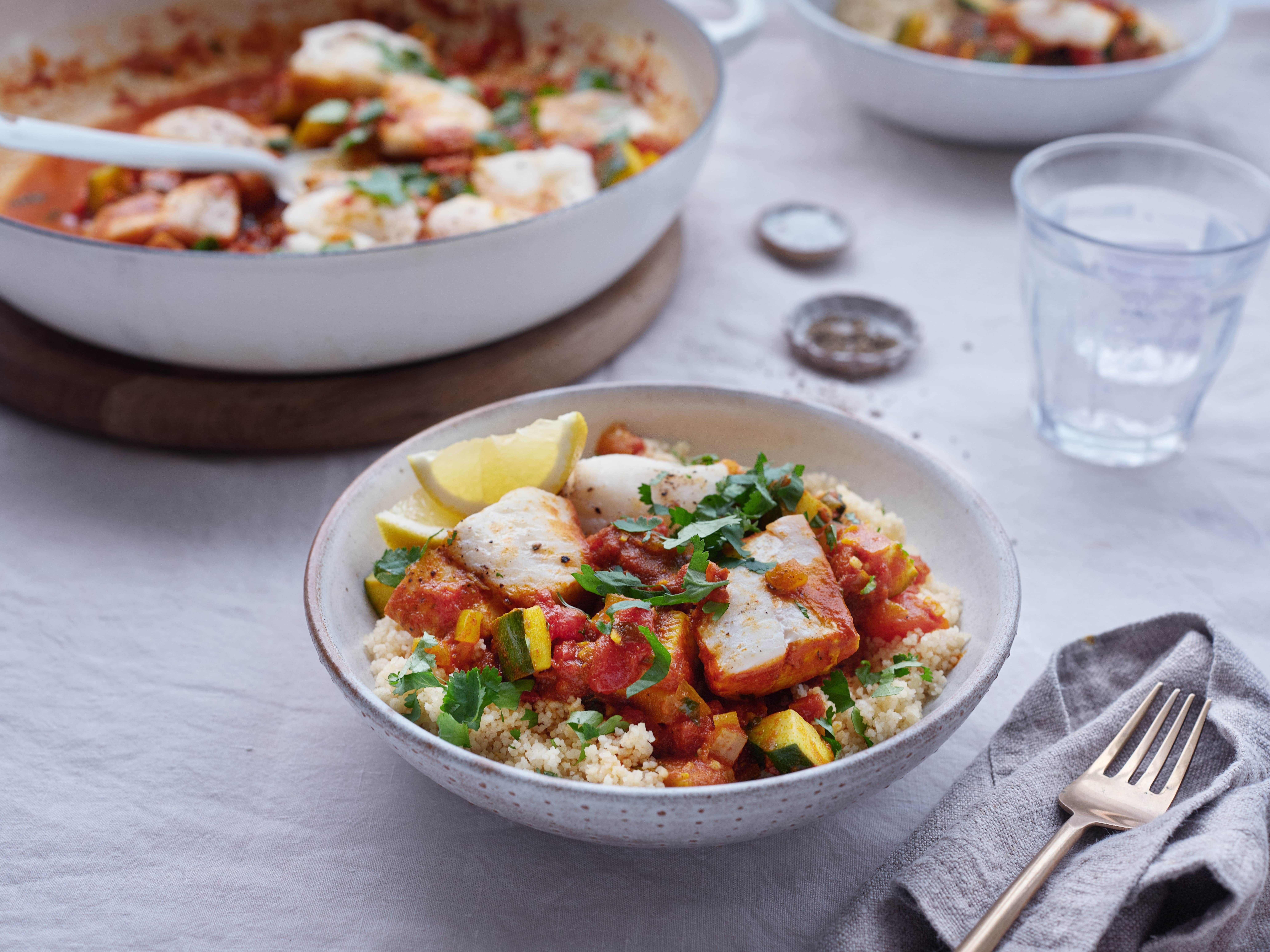