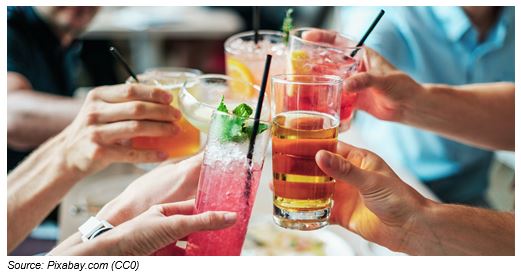 There is a consumer trend towards alcohol moderation and avoidance, with 84% of global consumers actively trying to reduce or moderate their alcohol intake, according to a 2017 GlobalData report. The trend is especially widespread among young people with over 25% of 16- to 24-year-olds choosing not to drink. However, consumers of all ages are becoming more health conscious and increasingly embracing sobriety due to concerns about the potential damage of alcohol. According to Heineken USA’s incoming CEO Maggie Timoney, “If you look at the consumer trends globally, and even Ireland, moderation, health and wellness, are key trends.”

The low/no-alcohol movement is becoming one of the biggest drinks trends in years. Sales of low/no-alcohol drinks have risen by more than 20.5% in just one year, with low-alcohol beer and cider sales soaring by almost 30% according to Kantar Worldpanel. AB InBev is expecting no- or low-alcohol beers to make up 20% of its total volume worldwide by 2025, up from 6% at present, and according to Cees’t Hart, the CEO of Carlsberg, non-alcoholic beer grew three times faster than the overall beer market in 2016.

The no-alcohol spirits trend really kicked off after the rapid success of the first no-alcohol distilled ‘spirit’ called Seedlip which launched in 2015 to solve the “what to drink when you’re not drinking conundrum,” according to its founder Ben Branson. Breweries and distilleries are capitalising on the movement. Diageo acquired a stake in 2016, its first ever investment in a non-alcoholic drinks company. According to its global innovation director, Helen Michels, Diageo recognises the “opportunity of non-alcoholic drinks and will continue to explore and invest in this area”. Pernod Ricard is also moving into the zero-alcohol spirits arena, launching and distributing Ceder’s distilled non-alcoholic gin in the UK. “This is a growing and exciting area for Pernod Ricard UK and we are delighted to offer our customers and consumers a non-alcoholic gin alternative,” said Laurent Pillet, managing director at Pernod Ricard UK.

Every year, spirits giant William Grant & Sons hosts the opening party for Tales of the Cocktail, one of the biggest annual events for spirits industry professionals. This year the party focused on responsible consumption and was entirely alcohol-free, serving twenty non-alcoholic cocktails created by renowned mixologist Julia Momose. According to Charlotte Voisey, director of brand advocacy at William Grant "I think this will be part of a trend where alcohol-free will just become better. I hope that this party is an educational moment for bartenders, so that they are exposed to what non-alcoholic cocktails can be."

A Look at Some New Low/No-Alcohol Products:

● Stryyk: Not Rum and Not Gin are a range of zero-alcohol distilled ‘spirits’ launched by the founder of Funkin cocktail mixers, targeting 18-35-year-olds. Neither contain sugar, fat, carbs or artificial flavours and are described as “100% natural”.

● Big Drop and Nirvana: two British craft beers with less than 0.5% alcohol and a big focus on flavour which is helping drive the trend in the UK.

● Heineken launched 0.0, an alcohol-free version of its lager, last year to capitalise on the no/low-alcohol beer movement.

● Carlsberg: set targets to double sales of non-alcoholic variants by 2022.