According to a Eurobarometer data report on "Habits of consumption of fish and aquaculture products" by Kantar TNS for the European Commission, 3 out of 4 Spaniards aged 15 and over consume fish or fish products at least once a week at home. The figure is much higher than the average offered by the group of Europeans surveyed, with only 42% of weekly consumption, at the household level, of this type of products.

Not surprisingly, Spain is the European country with the highest monthly consumption of fish in households: 92% of Spaniards consume fish and aquaculture products on a monthly basis, followed by Swedes (90%) and Danes (86%). When asked about the consumption of these products outside the home, the figure declines and only 19% of Spaniards declare consuming it on a weekly basis in a restaurant, bar, etc., although 46% do say they consume them outside the home at least once a month.

In line with this high consumption, it was reported that 67% of Spaniards buy fish /fish products at least once a week, 30 points higher than the European average (37%). It is striking to note that almost 2 in 10 Europeans (17/18%) declare that they never buy fish or aquaculture products. The study also shows that Spaniards tend to consider fish or aquaculture products expensive; 8 out of 10 buyers/consumers of these products claim that they would buy more if they did not have such a high price. In fact, price is the second most important aspect when buying fish and aquaculture products, followed closely by the importance of the aspect and appearance of products (freshness, presentation, etc.).

When it comes to trying new species and fish products - Spaniards are divided. More than half (56%) who consume/buy these products declare that they like to try new species (60% on average in Europe); More specifically, in Spain, 54% say they try new products at home, and 49% when there is a promotional event, for example in a supermarket, almost the same proportion of those who declare trying these novelties in restaurants or on special occasions.

Despite the fact that the Spanish, when buying these products, frequent the fishmongers more than the European average (52% in Spain versus 40% in the whole of Europe), the weight of purchases for this category is higher for grocery stores, supermarkets or hypermarkets (66%). The traditional market is the third most important sales channel for these types of products, used in 3 out of 10 cases. 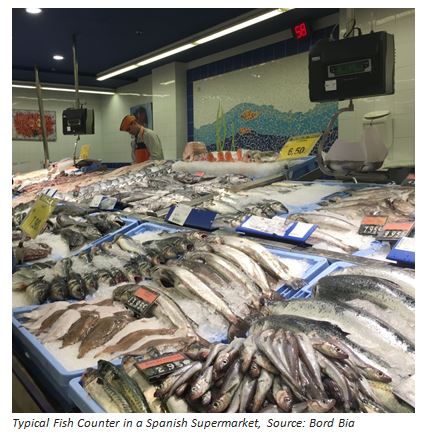