Spain, with a total bovine herd of 6.18m heads, (of which 1.9m are suckler cows and 0.84m are dairy cows), and a production of 640,000tn of beef, is a relevant cattle importer (nearly 584,000 heads in 2016) both for its beef industry but more recently it has also started playing an important role as a livestock exporter to third countries.

Livestock demand is mainly for male dairy calves (393,500hds) and weanlings from 160-300kg (103, 135 hds) which are finished intensively for young bull production from 10-16 months of age for the domestic market or for export to Portuguese retailers or brought to stores for live exports. 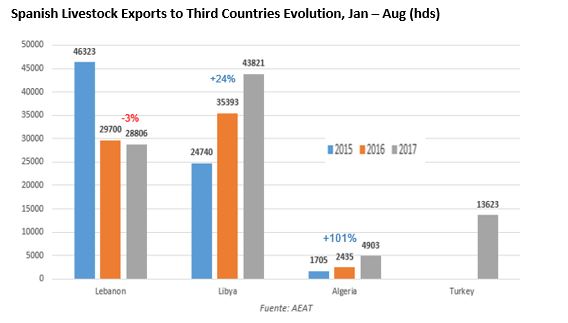 As a result, Spain remains a strong market for Irish calves and livestock promotion continues to focus on developing the calf trade, through event sponsorship with Asoprovac (the organisation representing Spanish feedlot owners), Irish livestock advertising and networking at the main sector gatherings.