Up to Speed – Understanding China’s New Values for New Opportunities

China is dynamic, captivating, ever changing and a country totally at odds. Is it communist or capitalist? Modernist or traditionalist? A champion of globalisation or protectionist? Experience driven or materialist? The list goes on…

The difficulty in approaching China and coming to terms with its dynamism comes from many elements. One of them is simply that China is not merely a nation-state, but a civilisation of its own kind. If you want to do business there, you better listen up and understand the nuances of this fascinating world.

Let’s begin by focusing on three shifting Chinese consumer values. It is important to remember the word dynamic when reading this, China changes quickly and often. So while these changes are relevant today, they might not be in 2020 – keep up!

1. They embrace all things digital, but not perhaps as we know it.

Chinese consumers are digital natives, but due to the hyper responsive government censorship (which continues to ramp up) they have very different behaviours online. It is true that a lot of younger consumers in tier 1 cities like Shanghai and Beijing use VPNs to access the ‘western’ world wide web but they do so with increasing caution.

China is the largest mobile market globally, with close to 1.2 billion subscribers (GMSA, 2019). Research also shows that in 2018, more than 194 billion apps were downloaded there (App Annie, 2019). Chinese consumers are truly mobile first, from payments to shopping and with that there are clear opportunities for brands to embrace.

One such opportunity that arises is the use of AR. Gaming has a significant cultural place in China (Stylus, 2019). For almost 40 years, the one-child policy was enforced – so without siblings, kids turned to gaming and online communities for social interaction. An example of an up-to-speed brand that has successfully tapped into this phenomenon is Italian luxury car manufacturer, Maserati. It’s smart showrooms, in-game avatar selfies and AR help provide personalised services to a mobile first (and 🤑🤑🤑) consumer. You can watch more about its efforts here.

2. They are increasingly discerning and fiercely quick to spot a fake.

Chinese people are more astute than ever. They have an eye for detail, which has been formed in a world where counterfeits were often rampant. This makes them incredibly detail orientated and if you want them to part with their hard earned RMB, then you better be sure your product is ready for close inspection. 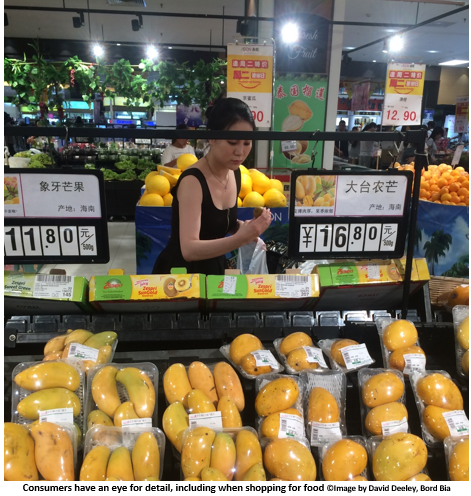 Having imported credentials is definitely attractive for Chinese people - this is particularly true for food. But we are beginning to observe a shifting cultural mindset behind “Made in China” 🇨🇳 and this is something we need to watch closely into the future.

This cultural adjustment is strongly represented by the up-to-speed, 88 Rising – a Chengdu-based rap quad. The group shot to fame through internet sensation "Made in China," including lyrics like "My chains, new gold watch, made in China”. The message in the song might be subtle and humorous, but it does represent growth in Chinese pride. Another example of this patriotism was observed at the celebration of the 70th anniversary of the founding of the People's Republic of China just last month.

3. They’re pressurised and pushing back, leading to an emergence of ‘Sang Culture’.

Life in China is often described as pressurised – whether it is the rat race of a Shanghainese commute or tiger parenting, there is very little chance to let off steam. Today however, we are seeing pushback from a disenchanted youth.  At a recent workshop on the changing Chinese consumer, Crowd DNA, a London Based Cultural Insight agency, spoke about the emergence of ‘Sang Culture’.  This ideology sees young Chinese staging a rebellion against society - professionally, personally and politically (FT, 2018).

This can be seen through the fact that more young women are opting out of conventional roles and rites, including motherhood and marriage (Stylus, 2019). Some 40% of working women in China are reluctant to have children, double the 20% figure in 2016 (Zhaopin, 2017). Likewise, many are rejecting marriage in favour of pursuing careers and independence, despite society's view that they're becoming sheng nu – or "leftover women" – as a result.

Up-to-speed takeaway chain Sung Tea have really embraced this culture. Menu items include my-ex's-life-is-better-than-mine fruit tea and achieved-absolutely-nothing black tea all served in an environment that provides solace to those struggling to stand out.

And this constant trade off to carve your own path under tight control is nicely summarised in a quote by Crowd DNA KIN member, Scene Kid: 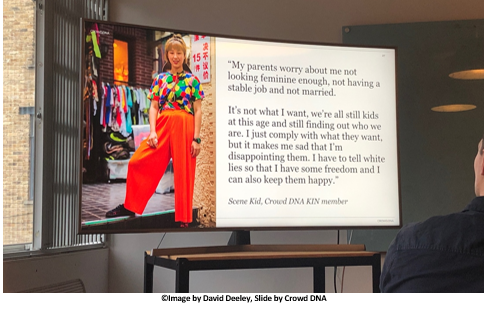 So there you have it, three shifts in the cultural landscape in a country grappling with contradictions. But was this the vision for China over 80 years ago?  When we look back to the founding father of the People's Republic of China, Chairman Mao, he famously speculated on the nature of contradictions in a 1937 essay: “The law of contradiction in things, that is, the law of the unity of opposites, is the fundamental law of nature and of society.”

As an outsider looking in, I agree with Mao’s sentiment somewhat. Contradictions are important because we can actually learn from them. In the world of insight, we are constantly faced with deeper understanding that often leads to a contradiction of the old way. It is up to the enlightened to make a decision on whether to discard the old and embrace the new. Or perhaps, to not pay attention at all.