The Irish pigmeat industry has evolved significantly over the past 50 years since Ireland entered the European Union. Irish pig producers are exposed to commodity supercycles where geopolitics and weather events can play a part in significantly higher feed prices. More recently, EU producers have also been exposed to animal disease events that impact on international trade market access which has caused significant oversupply issues.

As the Irish pig industry consolidated over the past 20 years, the Irish pig breeding herd has declined over 19% to 152,000 head in the June 2021 CSO livestock census. However, despite decline in breeding numbers, total Irish pig production (including live exports) reached record levels of just over 4 million head during 2021 reflecting on-farm productivity and genetic improvements. This increase in Irish pig production coincides with record EU pigmeat production during 2021, where output reached around 23.5 million tonnes.

The EU Commission published their latest short term outlook during Autumn 2021 which showed a 0.6% increase in pigmeat output for 2022. However, higher input costs and lower producer prices in recent months is likely to push output downwards during 2022. In the December 2021 livestock census, the German breeding herd fell by 7% to 1.59 million head reflecting the fallout from restricted International market access following the detection of African Swine Fever. The only other member state, Denmark, where latest census information is available shows their breeding herd 2% lower in October 2021 at 1.26 million head. Elsewhere, the UK is forecasting that output will fall by around 3% to 1 million tonnes as the breeding herd fell by 6% in the December 2021 livestock census reflecting low producer prices and some difficulty marketing pigs.

Irish primary pigmeat exports (excluding value added pigmeat) were estimated to have fallen by 3% during 2021 to €541 million compared with the year prior. The value of these exports were impacted by lower producer prices despite volumes increasing by 3% due to strong on farm productivity gains. Slower producer prices reflected lower demand from Chinese importers as the year progressed, record EU supplies, and more competition from key global suppliers such as Brazil and the US across target International markets.

The share of overall Irish primary pigmeat exported to International markets moved from 58% during 2020 to around 71% during 2021. China is the number one partner market for Irish pigmeat suppliers. Underlining the strategic importance of this market, China was responsible for importing 38% of total global pigmeat imports last year.  For 2021, Irish pigmeat exports to China were largely unchanged at 97,000 tonnes. However, there was some differences around the pattern of supply to the Chinese market. Typically, Chinese demand strengthens after the 1st quarter and peaks during the Summer. Last year, Chinese demand peaked during the 1st quarter and fell away as the year progressed.  As illustrated in the following chart, monthly pigmeat exports which were running at between 10,000 to 12,000 tonnes during the 1st quarter before falling back to around half this amount as the year progressed. 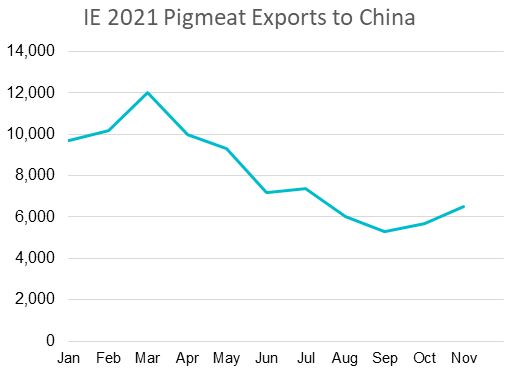 EU pigmeat shipments were largely unchanged during 2021 at an estimated 5.45 million tonnes compared to prior year levels. However, strong demand in markets such as South Korea, Philippines, US, Vietnam and Australia in particular offset lower exports to the Chinese market which fell by 20% to an estimated 2.67 million tonnes. Nevertheless, China still accounted for 50% of EU pigmeat shipments compared to 62% the previous year.

Challenges facing Irish and EU producers in 2021 have carried into 2022, as rising costs of production continue to exceed producer returns. In Europe, the fallout of African Swine Fever across Western Europe into Germany, and Italy more recently will continue to restrict the export potential from the EU region. However, EU pigmeat supplies are likely to contract by low to medium single digit terms as low producer prices and high costs of production impact on farm viability across the region. According to the USDA, Chinese pigmeat production is expected to rise by 1% to 49.5 million tonnes as the sector continues to be incentivised to expand. However, it should be noted that latest live Chinese pig prices are making 14.35 CNY/kg, this is  well below the costs of production which are projected at 18 CNY/kg. Current Chinese prices have been running at these levels since the start of the 2nd half of 2021, this would suggest that further recovery in Chinese pigmeat output may be overstated for 2022. The threat of African Swine Fever spreading across Europe and Asia remains. Since January, new measures were introduced by South Korean authorities to reduce wild boar populations near pig dense regions. More ASF outbreaks have been confirmed in Malaysia where the disease was only confirmed during February 2021 with the latest confirmed case reported in Thailand in January 2022. Opportunities to develop high potential markets such as Mexico, the 3rd largest global importer, was boosted by recent news that the tariff free quota for approximately 10,000 tonnes was extended until the start of the 2nd half of 2022.

From January to April, a range of consumer advertising campaigns will take place across the following platforms:

In April, Bord Bia will launch a new radio pigmeat campaign currently in production. For the remainder of the year, plans are being finalised around Quality Assurance consumer promotions. New activity is being considered which would promote pigmeat for BBQ occasions during Summer, encouraging consumption of pigmeat cuts that are not traditionally consumed in Ireland.

A full list of activities that supports client companies and the pigmeat industry across target export destinations, and markets under the EU pigmeat programmes include the following: