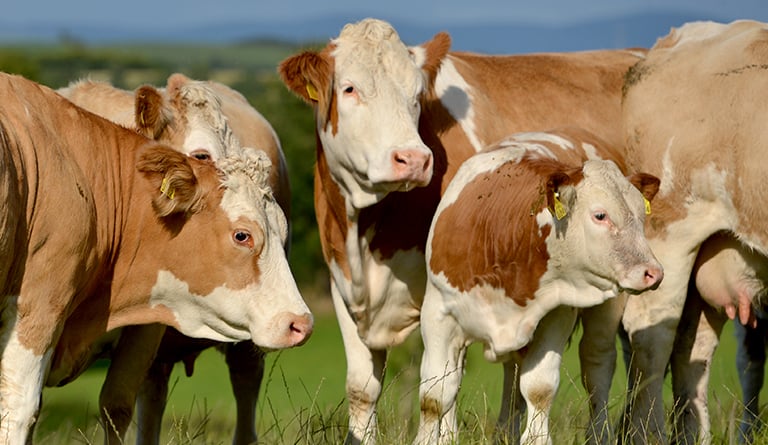 Throughput: Cattle supplies at export approved meat plants totaled 38,539 head during the week ending November 19th, 2022 (Week 46). This figure is 2,882 head below the corresponding week in 2021, representing an eight per cent decrease.

A total of 1,626,351 cattle have been processed during 2022 to date, an increase of 122,540 head from the corresponding period in 2021 (an additional eight per cent on 2021 figures). Overall supplies for 2022 had been forecast to grow by approximately 110 - 120,000, with higher numbers of cull cows and lower exports to Northern Ireland inflating this figure somewhat. Difficult weather conditions have brought the grazing season to an end across much of the country. This is likely to bring a seasonal contraction in the number of animals being offered for sale.

High levels of inflation in key export markets has impacted on consumer demand for beef, as shopper spending has come under increasing pressure. While manufacturing beef remains somewhat more buoyant, the retail market is particularly challenging with customers focusing increasingly on pigmeat and poultry, which remain more competitive in price terms. This has also curtailed promotional activity which typically creates higher demand for Irish beef across our markets.

Note that reported prices exclude VAT but include all bonus payments such as in-spec bonus, breed-based producer groups etc.

World prices: Young bull prices in the EU have remained strong in recent weeks with the latest reported price for R3 grading young bulls increasing 2c/kg to reach €5.10/kg (excluding VAT). An even balance between supply and demand for cattle in many markets has contributed to this stability in the trade. UK R3 Steer prices have dropped slightly by 1c/kg to €5.10/kg.

During the week ending 12th November, 2022 there were 2,620 cattle exported out of the country which takes the total for the year to date to 266,280 head. Cattle exports are now running roughly 12% ahead of the corresponding period in 2021.

Demand for Irish cattle has remained firm across the key European markets with good numbers of weanling and store cattle traded to Spain, Italy and Greece in particular during the last few weeks. Smaller numbers of cattle for both breeding and further production have also been exported to markets in Eastern Europe. Mainland Europe remains the most important outlet for Irish cattle exports in terms of overall numbers however there has also been a growing demand from third country markets in North Africa and the Middle East in recent times. This has been reflected in increased activity from the exporters in sourcing cattle to meet the demand.

After a weaker trade for much of the year the level of cattle being exported to Northern Ireland has increased and are currently operating at similar levels to Autumn 2021. Tighter cattle supplies north of the border have contributed to this trend with a growing demand for both direct slaughter cattle and those for further finishing.